‘We don’t have anything to lose’: major protest planned in Beirut as despair turns to anger

Thousands of people in Lebanon have prepared Saturday for a major protest against a political leadership they blame for a monster explosion that killed more than 150 people and disfigured the capital Beirut.

Two days after a landmark visit by French President Emmanuel Macron, diplomatic activity intensified in Beirut to organise international support for the disaster-hit country ahead of a Sunday aid conference.

For the fourth day running, Beirut woke up to the sound of broken glass being swept on the streets, its inhabitants still taking stock after one of the biggest blasts of its kind in recent history.

A fire at Beirut port on Tuesday ignited a stock of ammonium nitrate and triggered an explosion that was felt in neighbouring countries and destroyed entire neighbourhoods of the city.

Spectacular videos of the disaster show a mushroom-shaped shockwave that drew comparisons with the 1945 atomic bombs on Japan while foreign rescue teams compared the devastation with earthquake scenes.

Saturday could be the last day anybody buried under rubble has any chance of being found alive and according to the health ministry, more than 60 people are still missing.

The president and prime minister of Lebanon have promised that a government investigation would net the culprits but, more than a mere case of negligence, many Lebanese see the blast as a direct result of their leaders’ corruption.

“After three days of cleaning, removing rubble and licking our wounds… it is time to let our anger explode and punish them,” said Fares Halabi, a 28-year-old activist who planned to join a protest scheduled for the afternoon.

Some protesters erected a mock gallows for Lebanon’s top politicians on Martyr’s Square, the epicentre of a protest movement that briefly rattled the country’s hereditary ruling class.

The lack of political change combined with a stinging economic crisis and the coronavirus pandemic all but snuffed out the revolutionary movement – until this week. 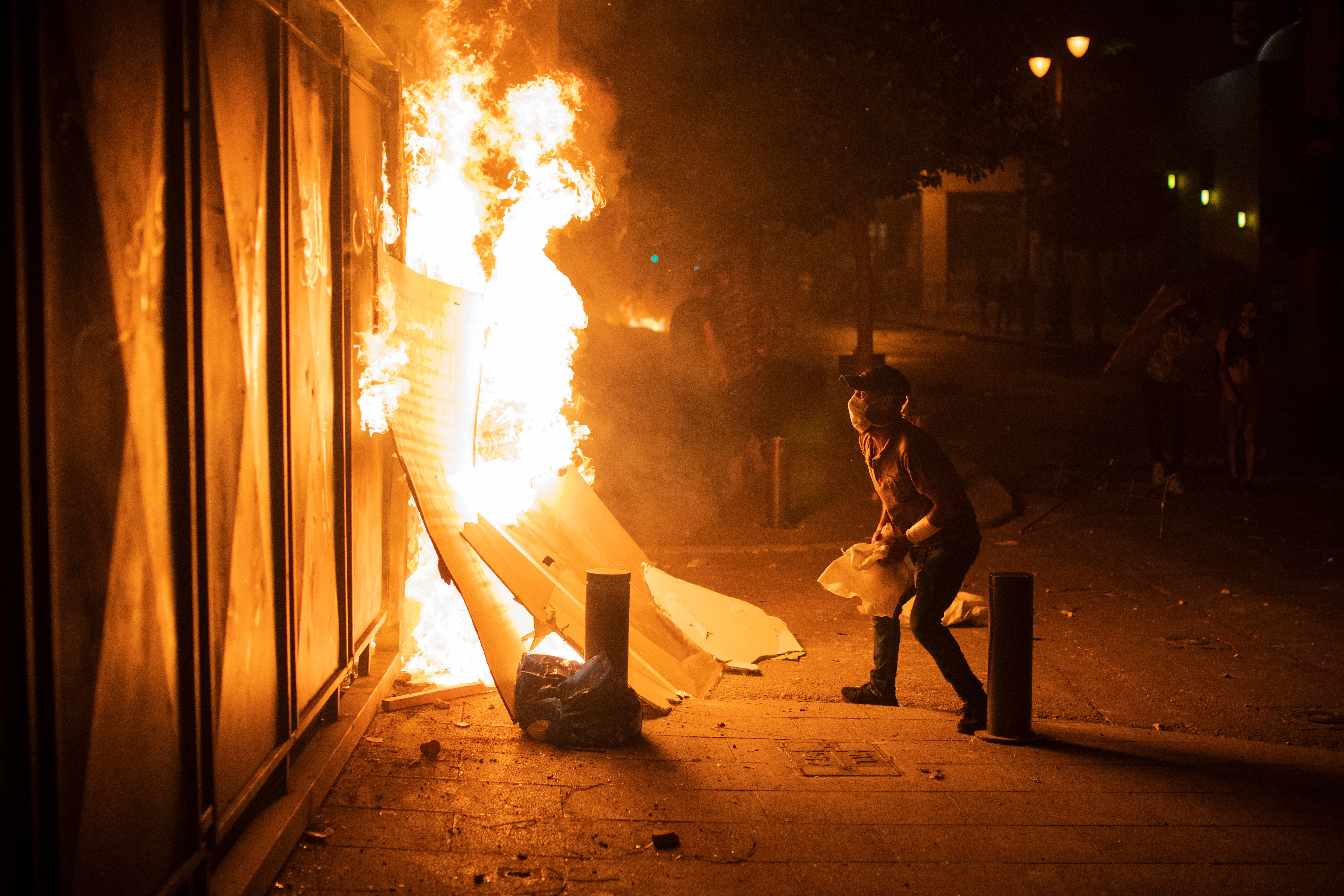 Anti-government protesters throw stones and clash with the riot police, during a protest in Beirut earlier this week.

“Today is the first demonstration since the explosion, an explosion in which any one of us could have died,” said Hayat Nazer, an activist who has contributed to solidarity initiatives for blast victims.

“This is the biggest warning for everyone now that we don’t have anything to lose anymore. Everyone should be in the streets today, everyone,” she told AFP.

However, some of Lebanon’s leaders seemed to consider the outpouring of international solidarity as an opportunity to break the government’s diplomatic isolation.

A donors’ videoconference organised by France and the UN to stump up aid for the devastated Lebanese capital Beirut is scheduled for Sunday, the French president’s office announced Saturday.

US President Donald Trump had announced Friday that he would take part, saying “everyone wants to help!”

“We will be having a conference call on Sunday with President Macron, leaders of Lebanon, and leaders from various other parts of the world,” Mr Trump added.

Lebanon defaulted on its debt earlier this year and the current leadership has so far consistently failed to address the economic emergency and agree on an international rescue package despite intense Western pressure.

Speaking on Friday evening, President Michel Aoun said “the explosion has led to the lifting of the isolation.”

Hezbollah leader Hassan Nasrallah also said the disaster had created “an opportunity” to get the world to work with Lebanon again.

Three senior diplomats were in Beirut Saturday in a show of solidarity with the disaster-hit city, where 300,000 people were made temporarily homeless by the port explosion.

Mr Aoun however rejected calls backed by Mr Macron for an international and independent investigation into the blast.

A total of 21 people have been detained so far, including Badri Daher, director-general of Lebanon’s customs authority.

But few Lebanese seemed to have any trust that the leadership would incriminate its own in an investigation chaired by some of the country’s top officials.