Scott Morrison confirms JobSeeker will be boosted by $50 a fortnight

Unemployed Australians will receive an extra $50 a fortnight as Scott Morrison permanently increases the dole.

But those on welfare will have to fulfill more rigorous obligations to taxpayers to prove they are not rorting the system.

They will have to attend face-to-face appointments with officials, make 20 job searches a month and take a short training course or do work experience after six months on welfare.

The government will also set up a hotline for employers to dob in someone who rejects a job they are qualified for.

‘Every person we get back into a job means a lower cost to the taxpayer. That’s why the mutual obligation is so important,’ Mr Morrison said.

Pictured: People are seen in Centrelink queues in Gold Coast back in April 2020

The new rate, which will kick in when the $150 JobSeeker supplement runs out at the end of March, will provide an extra $3.57 a day.

The increase lifts JobSeeker to 41.2 per cent of the national minimum wage and will cost $9billion over four years.

Mr Morrison said: ‘We are moving from short-term emergency measures to long-term arrangements that people can rely on should they find themselves out of work.

Cassandra Goldie from the Australian Council of Social Service said the permanent increase should have at least matched the temporary top-up payment.

‘Anything below where the rate is now is a betrayal,’ she said.

Without government intervention the unemployment benefit would have returned to its pre-pandemic rate of $565 a fortnight, or $40 a day.

‘This decision will keep people going hungry. It will keep unemployed people facing homelessness,’ he said.

‘We must raise the rate above the poverty line.’ 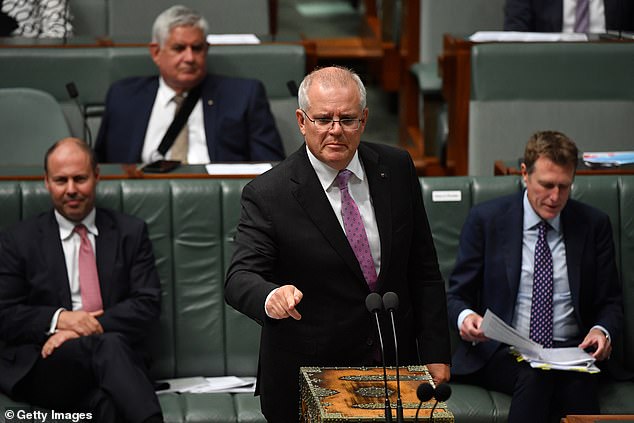 Social Services Minister Anne Ruston said the $50 increase was decided upon because it provides more support without disincentivising work.

‘We needed to make sure that we created a system and improved a system so that the incentives to take up work were there, and the disincentives were removed,’ she said.

Opposition Leader Anthony Albanese said Labor will not stand in the way of the increase.

‘It’s important there be a permanent increase and that be done as a matter of urgency, just to provide certainty for people as well,’ he told reporters.

‘I don’t quite understand why this government has held back on this announcement.’

The unemployment benefit rate has not been increased in real terms since the 1990s.

There are about 1.2 million people on JobSeeker payments.

Senator Ruston believes hundreds of thousands of welfare recipients are single, have no children and no medical barrier to full-time work.

‘Whether it may be a short-term job in agriculture or casual work in the caring industry because modelling tells us that people who report earnings, even just a small amount, are at least twice as likely to exit the social security system,’ she said.